The numero uno problem with living in a small space is that it feels, well… small. Your bed is steps away from your desk, which is right next to your kitchen, which is butted up against your closet… Packing everything one needs to LIVE THEIR LIFE into one tiny area makes it feel crowded and overwhelming. That’s no way to exist! Your home should be a place of comfort, fun, and productivity.


There’s a great deal to be said about organization (we’ll get to my obsession with drawer dividers and labelmakers later), and the first thing you must do in a tiny-ass apartment is organize the SPACE. Not just the things in it, but the actual square footage of your place. Think about the different areas you’ll need: sleeping, eating, entertaining, and work areas are the most common. Distinct areas that each serve their own purpose not only make your place feel bigger because everything’s not mixed together, but it gives you a personal sense of calm and order. Once you’re done paying your bills at your desk, you can leave it all behind when you walk over to your sofa for some vegging out with your TiVo.


In a studio, you’re not going to have fancy things like “walls” to delineate those areas for you, so you’ve gotta find a way to do it yourself.


The most obvious dividers are the physical kind. There are screen dividers, both ceiling-mounted and those that sit on the floor (check out these shoji screens from Cherry Tree Design, or these woven panels on tracks from Smith + Noble). There are curtain dividers. Then there are those clever dual-purpose dividers like large bookcases; they provide storage while also breaking up the space. 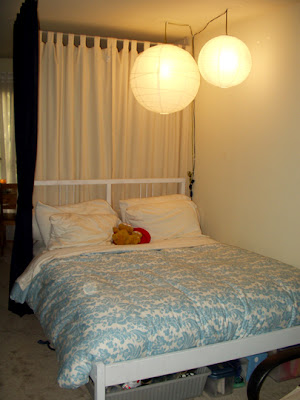 My original TAA. I used the white curtain as a wall between my sleeping head and the front door on the other side; the dark blue curtain could be pulled out to the foot of the bed for privacy if I had someone crashing on my couch. And yes, I still sleep with stuffed animals. 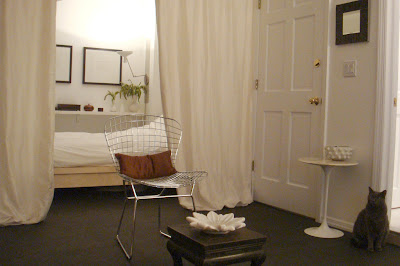 Flickr user lauracattano, who was featured on Apartment Therapy, has a cute sleeping nook and a cute cat. 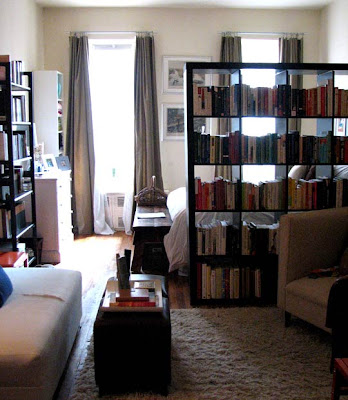 Check out these other sources for room dividers:


If your landlord allows you paint, you can use color to divide your space without sacrificing the room that physical dividers take up. Lauren’s Santa Monica railroad-style studio (below), which was an entrant in Apartment Therapy’s “Smallest, Coolest” contest in 2007, uses color to make the distinction between the main living space and the bedroom. There’s only a suggestion of a doorway built into the wall, and Lauren’s also put up some curtains for privacy, but it’s really the turquoise blue of the bedroom that lets us know we’re looking into a wholly separate room. 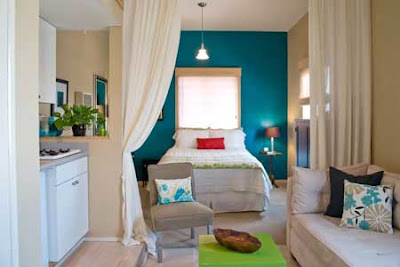 And finally, if you’re in the master class of Room Division Studies, the mere arrangement of your furniture can break up your living area into separate sections. 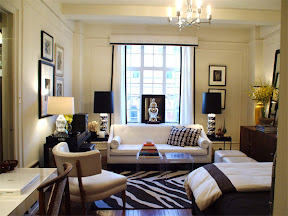 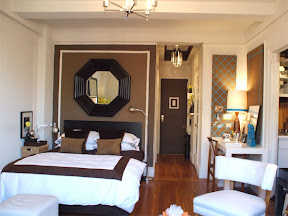 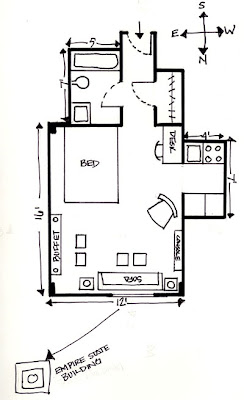 Ron Marvin is an interior designer who fit this adorable studio into what was once a hotel suite. Even though the place is only 300 square feet, he still has definite work, sleep, and entertainment areas. Ron’s desk is set off to the side facing the wall, and the bed is on the opposite side, facing out. The sofa, leather cubes, and chair all face the small coffee tables at the center to create a conversation area. Pieces that serve the same purpose are grouped together in separate parts of the room and are not intermixed. The desk isn’t in the middle of the entertainment area, for example. Also, the direction you face when seated (be it on the bed, at the desk, or on the sofa or chairs) further emphasizes the purpose of the sub-section you’re in. When seated at the desk, your eyeline is to the wall, (hopefully) compelling you to concentrate on your work. (Or if you’re like me, compelling you to mess around on Facebook some more.)


For tomorrow’s post, we’re going to get into some more space-saving specifics. We’ll be tackling what will inevitably be the biggest piece of furniture in your whole home: your bed. That’s right — where the magic happens…

Vintage Rug Buying Tips From the Experts at Rug & Weave

Get the D*S Newsletter